The Bachmann team has moved our offices to the beautiful campus of Pineland Farms in New Gloucester, Maine. Please make sure to update your records to reflect our new address:

Over time, Metal Bellows Expansion Joints can crack and leak at the turbine exhaust exit, near the diffuser of Combustion Turbine plants as shown here.

The old original metal bellows will fatigue, crack and eventually leak, which is caused by the constant thermal cycling and extreme vibration from the combustion turbine. The original Metal Expansion Joints can last for many years, but when they do fail, the downtime and lost revenue is costly, therefore the corrective actions need to be quick and reliable.  This is where Bachmann Industries demonstrates its strength as an industry leader in technical design and customer service.

A common industry fix is to install a high temperature fabric over metal EJ belt, (FOM) with layers of ceramic insulation. However, this can cause new problems if not attached properly.

Our FEA analysis revealed the problem with the inner ring duct area (nearest to the heat affected zone) “growing” circumferentially, due to the hot gases flowing though the duct.  However, the outer ring flange area, further away from the duct, remained cooler due to ambient air and further from the heat zone, and so it would not grow at the same rate.  This causes thermal stress between the inner ring, attached to the hot duct, and the outer ring, where the Expansion Joint is mounted. This stress can distort the bolt flanges, crack welds and allow hot gasses to leak out, which creates a dangerous situation for personnel and a loss of heating efficiency for the HRSG boiler.

Bachmann’s version of a Fabric-Over Metal (FOM) Expansion Joint for field installation is designed to prevent these common problems. Our improved design uses a Conical Attachment flange to prevent any cracking or fatigue problems.  The conical flange provides an angled “ramp” instead of the old stand-off flanges. 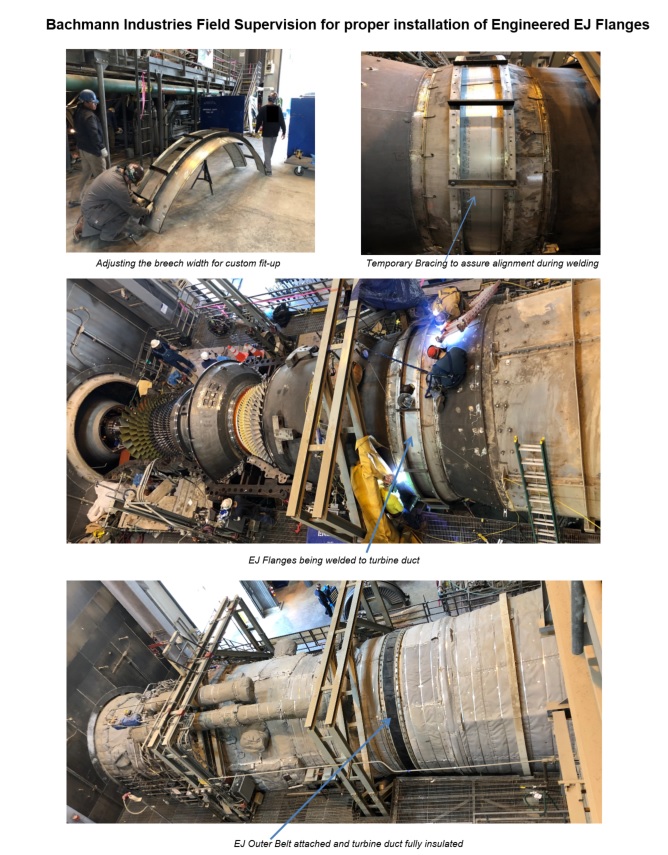 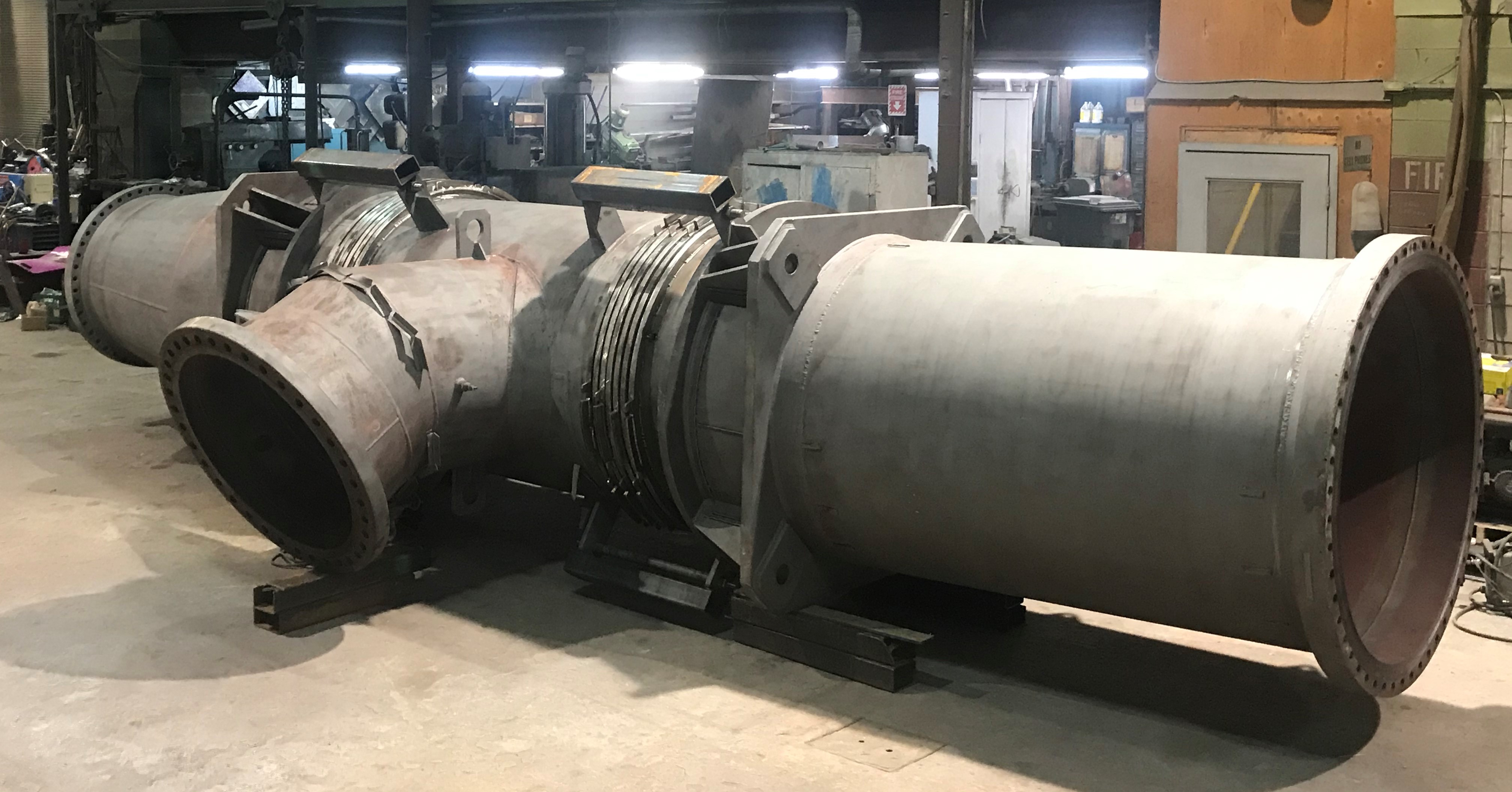 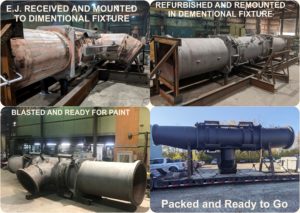 Bachmann is pleased to serve our Utility and Industrial customers with outstanding quality and timeliness.  A utility in the US recently looked to repair or replace four (4) of their aged, high pressure (@200 PSIG), high temperature (@ 750° F) metallic steam cross over expansion joints within their short one month outage window.  Bachmann pooled its engineering and project management resources to transport the expansion joints to one of its factories, replace the bellows elements, refurbish the 42” & 52” diameter pressure balanced expansion joint assemblies and return the joints to site for reinstall all inside the short outage.  Bachmann’s commitment to excellence and ‘can do’ attitude resulted in another successful project well done!  Way to go team!

Thank you to all our National Sales reps.  You all truly ROCK and we are proud to call you members of the Bachmann Family.   The event was full of networking, learning, fun, food and, to top it off, Lobster !

Bachmann Industries is thrilled to announce the receipt of a major contract for the design, manufacture and supply of two Model 67 GT Bypass Systems to be installed behind General Electric’s newest model 7HA turbines.  This North American project is scheduled to be delivered mid-2020 and the bypass systems will be the largest Bachmann has supplied to date! 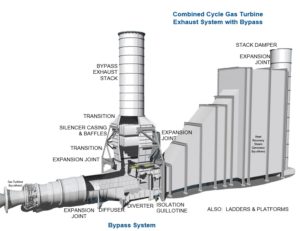 As a point of reference, the stacks, which are to be delivered fully assembled, will be 63 feet (19 meter) long with a whopping 25 foot (7.6 meter) diameter gas path, large enough to fully enclose two full size tractor trailers side by side.   The diverters for this project, each with a gas path 22 foot (6.7 meter) square will be the size of a 2-car high bay garage! 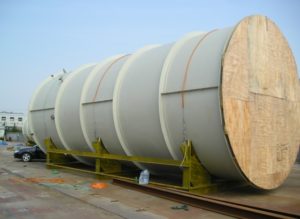 The fully assembled Bachmann stack shown to the left, by comparison, is 65% smaller than the ones required for this project at only 38 feet (11.5 meter) in length and a 15 foot (4.6 meter) diameter gas path.

Bachmann has supplied many similar, although slightly smaller, Model 65 GT Bypass Systems.  One such diverter damper, as shown in the picture to the right, was recently supplied for another project.

As we continue our ‘get to know us’ series, it is important to acknowledge the back office.  You know, those employees who keep the ship running in a quiet, unassuming way?  Certainly, engineering talent runs deep at Bachmann, spanning all departments from sales and technical applications, to design & engineering, to project management and field service, but there is a great deal of praise owed to the Bachmann’s facility and administrative staff who share an enormous amount of longevity, passion and a true commitment for excellence representative of the Bachmann brand name.  The average tenure of these folks is 13 years !  That is some tried and true talent for sure; its no wonder Bachmann is able to stay lean and efficient.  So who are these superheroes who keep the operation rumbling ahead?

Eric Holt, our warehouse guru, manages the inventory, shipping and receiving, and incoming quality inspections.  Eric holds the Bachmann record for longevity @ almost 23 years!  he has proven himself a true staple in the office.  Eric has a grandson who is a year and a half, loves to farm and be self-sufficient and brags about his homemade beef jerky; jalapeno flavor is among his favorites.

Sue Clark has been the Bachmann 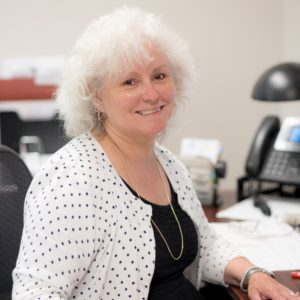 purchaser for over 13 years.  She runs a tight ship, which is especially valued because her role is critical in the project execution process.  Sue has proven to be a tough act to follow, just ask her fellow staff-mates who recently covered (or tried to) her department during a short absence.  Everyone was happy to have her back in the office for sure!  Sue is married and has several young nieces and nephews whose pictures adorn her office.  They are clearly her pride and joy.

Norm St. Pierre has been the Bachmann facilities custodian approaching 11 years now, but he is so much more than that.  He represents

the pride and spirit of Bachmann.  Just like ‘Norm’ from Cheers, we all love to chant his name when he walks into a room.   When he isn’t taking care of the building, he is assisting Eric out in the warehouse or doing whatever he can to fill the needs of the organization.  Norm loves his grandchildren and spends a great deal of time sharing stories of all their sporting activities.

Wendy McGraw has been employed at Bachmann Industries only two months longer than Norm. 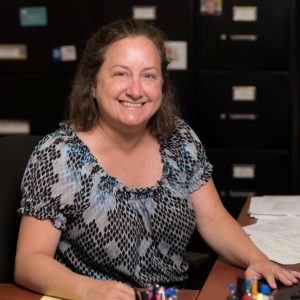 She is an especially important ‘cog’ in the Bachmann wheel.  Wendy holds her PHR certification and manages all the human resource functions, acts as the customer service representative, processing orders and sharing in the accounts receivable and accounts payable functions among many other administrative tasks.    Wendy is the youngest of four sisters, is married with a young daughter, and enjoys spending time with her family around her new pool.

Patty Fecteau, the lead staff accountant, has been with Bachmann just 6 relatively short years, but she is as cemented into the Bachmann culture as the rest.  Patty takes pride in the vast responsibilities of her accounting work.  We typically find Patty buried in piles of paper as she reconciles and manages the Bachmann accounts, expenses, and projects.   Patty is one of five sisters, grew up in a military family, and settled in Maine when her father retired.  She is married with one adult daughter and a grandson who is the light of her life.  Patty is also extremely active and participates in a worthy triathlon each year, Tri For a Cure.

Now this is an Expansion Joint !  This replacement Fluid Catalytic Cracking Regenerator Standpipe Expansion Joint, coming in at 32.5 feet long, 62 inches in diameter and weighing over 61,000 pounds, was shipped earlier 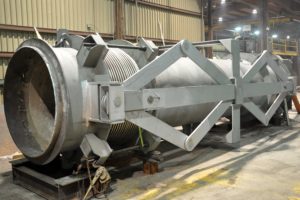 this year to a North American refinery.  Bachmann converted and upgraded the existing hot wall design to a cold wall.  The design also included pantograph linkage to equalize bellows movement, slotted hinges to carry weight of the center section and gimbal box with pinned end spool connections to allow for out of plane lateral movements. 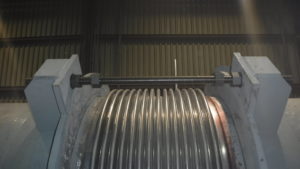 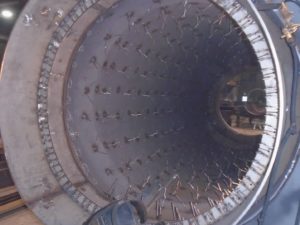 Gary Muzzey and Brian Garrison both joined our company earlier this year as members of the Bachmann Sales & Marketing team; Gary as an Aftermarket Applications Engineer and Brian as the Company’s North American Business Development Leader. They each bring an immense amount of energy and talent to our Company.

Gary comes to us with a B.S. in Engineering Physics and an M.B.A.   Having over 20 years of experience working in various engineering, sales, and product manager roles, primarily at a New England based industrial heater

company, Gary is a great fit for his new role at Bachmann Industries Inc.

Growing up in New Hampshire where his family owned and operated Muzzey’s Sales and Service, a well-known RV & Camper dealership, for over 25 years, Gary was well acquainted with the family business life-style.  He lived in New Hampshire until relocating to Maine in 2014, where he and his wife, Lynn, are now the proud parents of a precocious cat named Fred.

In his spare time, Gary enjoys fishing, golf, traveling and reading.  When asked what he enjoys most about his new role at Bachmann, Gary explains it is the balance between engineering and sales where he can best utilize his skill-set to creatively help customers solve their problems.

Brian’s connection to Maine began over 100 years ago when his great grandparents met in Maine before moving to Indiana where they raised their family.  Growing up in Indiana, then attending college and spending his young adulthood in Arizona, Brian’s story comes full circle back to the State of Maine where he met his wife of 19 years and eventually relocated – at his wife’s urging – just 5 years ago. 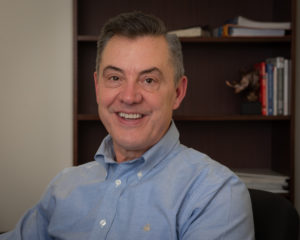 Brian has a long career in the semiconductor industry, with 20 years of it operating as a high achieving sales leader for companies ranging in size from $3 to 130 Million in annual revenues.  Brian reports being very enthusiastic about the opportunity to now work for Bachmann Industries: “I have never worked with a more experienced and talented team.  There is a pride in working here that gets me excited about each day.”

Married with 4 children and 3 grandchildren, Brian and his wife enjoy spending time each summer on Campobello Island.  He also has a lifelong interest in music, was part of a high school rock band, and still enjoys writing music, singing and playing guitar.