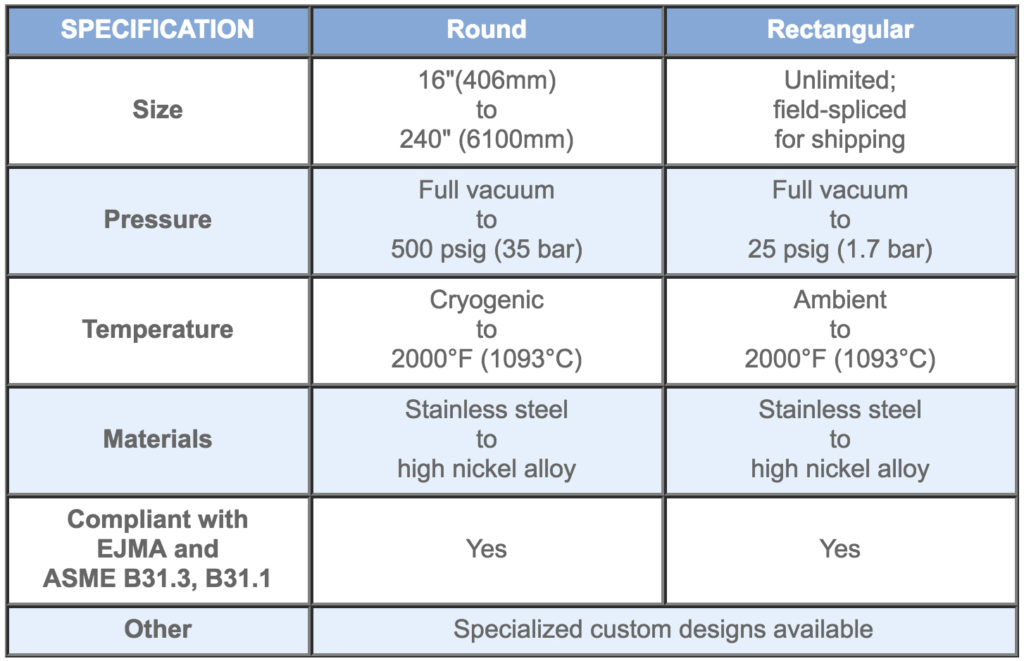 The Single Expansion Joint (the simplest expansion joint form of single bellows construction) is usually applied in applications of either straight axial extension or axial compression; however, a combination of axial, with limited amounts of lateral and angular rotation can be accommodated.

The Universal Expansion Joint (articulated double expansion joint-containing two bellows joined by a common connector for the purpose of absorbing any combination of the three basic movements: axial movement, lateral deflection and angular rotation)usually furnished with control rods to distribute the movement between the two bellows of the expansion joint and to stabilize the common connector.

Overall control rods govern the movement of the center pipe section and equally divide motion between the bellows elements. This configuration is used primarily for lateral deflection but can accommodate axial movement as well. Another application for this type of expansion joint utilizes overall tie rods which fix the overall length of the expansion joint and contain full pressure thrust (Only lateral deflection is accommodated.

The Hinged Expansion Joint (an overall hinge mechanism which when furnished with fixed hinge points allows angular rotation in a single plane) is usually used as a pair separated by a pipe section. The combination in turn absorbs thermal motion in one plane. Used in sets of two or three to function properly. An alternate hinge type expansion joint is the slotted type (one of the hinge members has a slotted hole which allows axial motion and rotation). These hinge devices are usually used as a pair with external anchoring devices provided within the piping system.

The Gimbal Expansion Joint (an extension of the hinge type,allowing rotation in any plane) is used in pairs to accommodate lateral deflection in any plane. The pressure thrust is contained within the gimbal arrangement. The most common use is a three-dimensional system with two gimbals in combination with one hinged expansion joint. This system accommodates thermal motion in three planes.

This metallic bellows expansion joint was supplied as part of an order for seven expansion joints on the hot oil quench process for a Naptha Cracking Facility. The 24″ ID refractory joint was designed for 50 psig at 1200° F and lateral movements approaching 6.5″.

This 35-foot long expansion joint was ordered by a wood chip gasification plant. The equipment is subject to very abrasive flow media and designed to operate at 15 psig internal pressure at 2000°F.

This 90-degree elbow is 78″ diameter x 190″ long and incorporates an over pressure rupture disc for steam condenser service.