Bachmann Industries is a proud organization with a deep passion for our business.  Our team, with an average tenure of 12 years, has not only a strong, cohesive family culture based on openness and honesty, but also a great depth of experience and knowledge to pair with our ‘can do’ attitude to the benefit of our customers all around the world.  This has cemented Bachmann as a true leader in the industry.

Take Mark Martel (Left) for example.  His history at Bachmann dates back to the early days when drafting was still ink on Mylar.  He claims his left-handedness prevented him from excelling at drafting on boards, and for this reason, he was an early adopter in the corporate transition to AutoCAD.  In fact, Mark played a critical role in the establishment of the drawing standards and templates for Bachmann.  Mark, having built up a deep, near 30 year, resume in damper proficiency, has earned the reputation as the Bachmann in-house expert for all damper matters.

Mark’s roots run deep in the Lewiston-Auburn area of Maine, home to Bachmann.   Not only can his family be traced back several generations, but his paternal grandfather was the seventh son of a seventh son, so the Martel family name holds a significant place in the history of the local community.  He is married with five children and four grandchildren, enjoys craft beers, and has recently found a love for RVing, a passion he shares with his wife.

When asked of his proudest moment as a Bachmann employee, he replies it was his multi-million dollar sale of a 4-port diverter bypass system to a US Utility company for a major DeNox project during the regulatory time period of SCR (Selective catalytic reduction).  Whether it’s Louver, Guillotine or Diverter dampers needed to modulate, isolate or divert air or gas flow, Mark is definitely your man.  He can develop a solution to fit most needs across many industries. 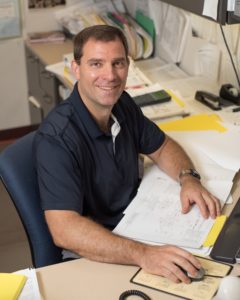 Andy was born in California but moved to Maine at a young age.  Although he grew up in a small family he is proud to say he remains very close to his parents and sister who still live near-by.  Andy is married with two adult daughters and among his passions is both playing and watching hockey, as well as his unique interest in racing vintage snowmobiles, which is a pastime he shares with his youngest daughter.

When asked about his history at Bachmann, Andy responded with recollection of the ‘early days’ when it wasn’t uncommon for an employee to be responsible for all aspects of a project from selling and engineering to managing through delivery.  He credits that full encompassing role for providing him with a well-rounded understanding that gives him competitive advantage now.  Just this year, Andy sold two of his largest, single item, metallic expansion joints to two different US based refineries.   He is certainly competent and eager to provide expansion joint solutions to any challenge in any industry.