Both Frank Benedict (left) and Jake Sylvain (right) joined Bachmann Industries this past spring as part of our dynamic and growing Project Management/Engineering group.  Settling in quickly, they have both added tremendous value to our Company and we are pleased to offer these introductions:

Frank grew up in Maine as one of five siblings.  After graduating from Maine Maritime Academy with a Marine Engineering Technology degree, he went on to work as an applications engineer and eventually operations manager for a local control valve and instrumentation company before joining Bachmann in April.  Frank reports he is enjoying the diverse problem solving and is most impressed by the close knit and supportive culture within the Company.  During his spare time, Frank considers himself quite the outdoorsman and enjoys fishing, boating, hiking and tinkering around with boats and cars. 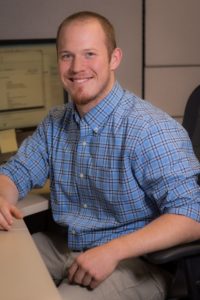 Jake also grew up in Maine but ventured outside the state, attending Penn State University where he graduated with a BS in Petroleum & Natural Gas Engineering.  From there, his early career took him into Russia where he served as a project engineer on a newly built oil rig and then further around the globe into Europe and Asia performing API inspections and mechanical integrity assessments of fuel pipelines and tanks.  After deciding to settle back home in Maine, Jake joined Bachmann in May,  where he has enjoyed the dynamic team and the opportunity to delve right into the project management aspect of the job.  Like Frank, he enjoys the outdoors; camping, skiing, and hiking whenever possible.